Yamaha’s Sport Heritage range is born from combining modern technology with paying homage to the great designs and colour schemes of our past. With the introduction of the new models in 2021 and 2022 the XSR Sports Heritage range is taken to a next level in terms of technology. The segment is maturing without losing its rebellious character.

All XSR’s serve their own purpose and have their own ideal terrain, where the XSR900 wants an environment where it’s power can be unleashed, the XSR125 feels comfortable in city centres, the XSR700 is a perfect fusion of both worlds as it is easily manoeuvres the urban grounds whilst not fearing twisty roads and endless bends.

Any rider can find their ideal motorcycle to identify with and to fit their own characteristics. By fusing iconic style with cutting edge technical specs, frame design and engine development Yamaha’s Faster Sons philosophy ensures that each bike in the Sport Heritage line has its own unique character and appeal – inciting a special pride of ownership amongst the many riders in the Faster Sons Community.

A community that embraced the versatility of the XSR range by making them truly their own. Between the 65+ customised bikes in the Yard Built programme and the countless number of bikes made to measure by riders themselves, Yamaha takes pride in having created a basis for rider expression. A platform where people pour their heart and soul in designing their ultimate bike. From complete overhauls to small refinements – Yamaha celebrates all application of personal style. 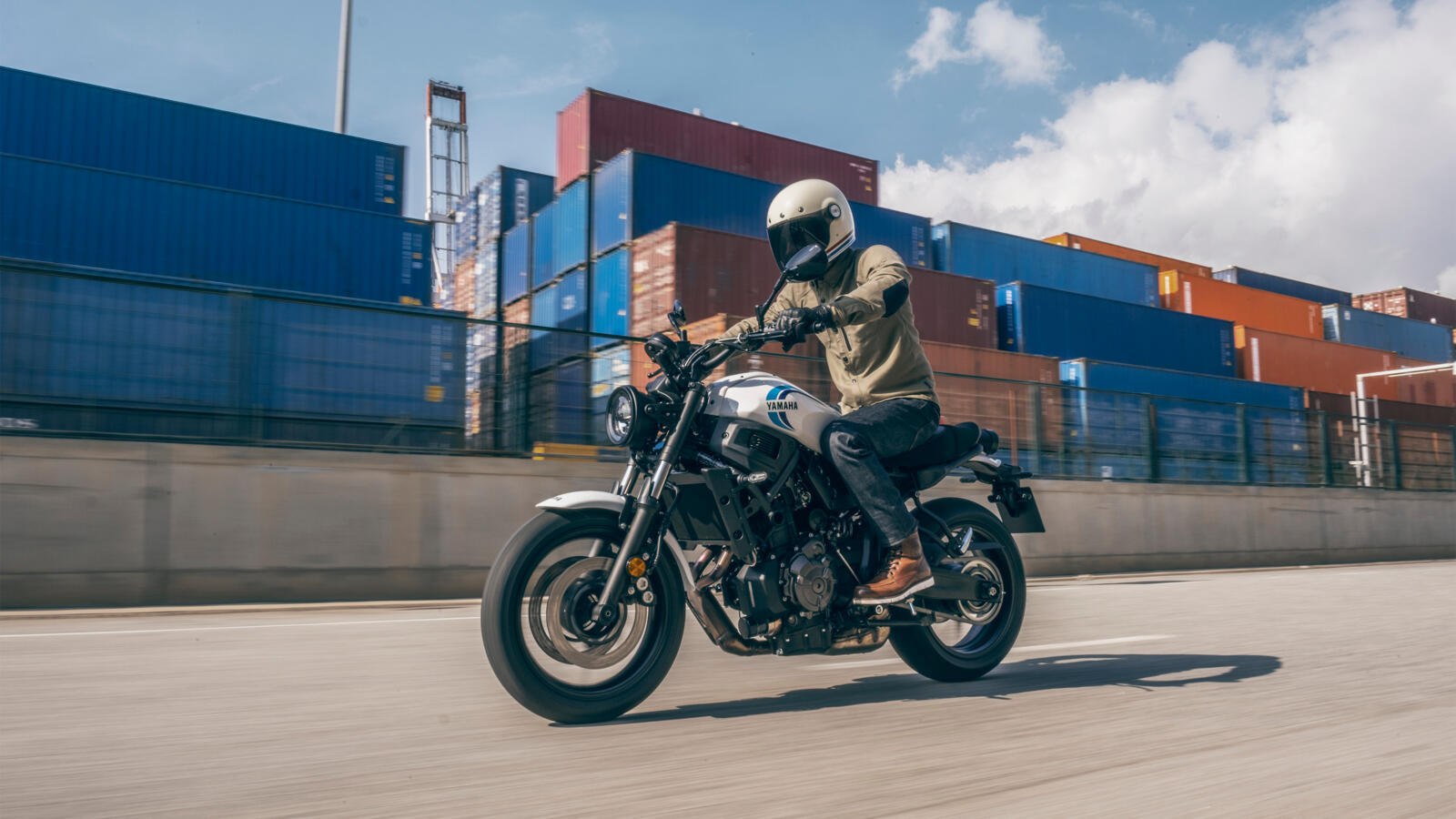 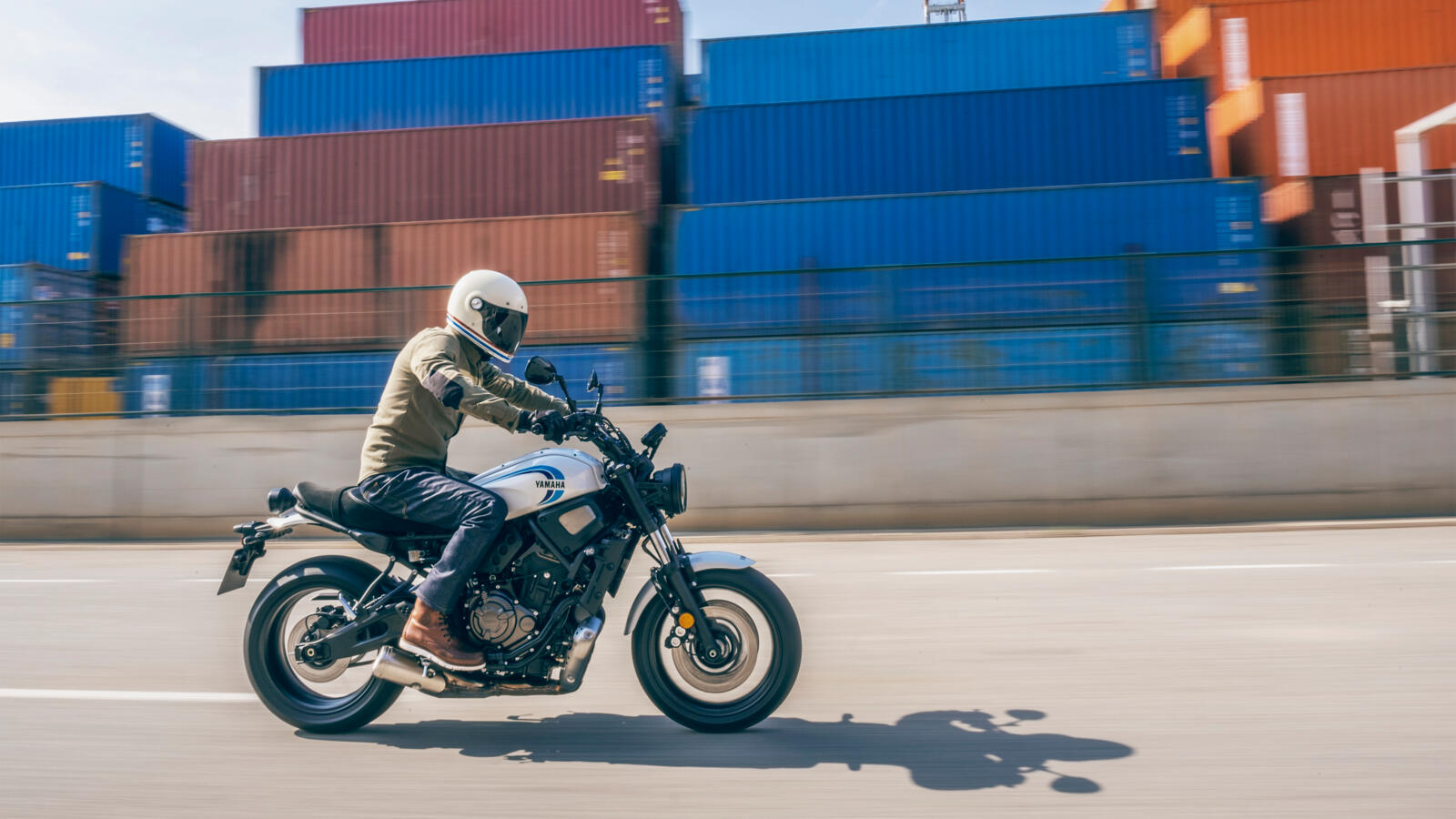 With the introduction of the XSR700 following Shinya Kimura’s concept from 2015 it soon became one of the favourite motorcycles for those riders who seek a rebellious fun machine with a seriously fashionable edge. Great looks inspired by Yamaha’s heritage models combined with the torque rich CP-2 engine guarantees an unforgettable ride. Not to mention the hard-to-remove grin on the riders face.

Whilst respecting the past, Yamaha looks to the future and decided to improve the existing platform of the XSR700 with a number of tweaks to lift it to the next level. In the meantime ensuring that the versatile character of the bike is not lost in the process.

The new XSR700 will feature its well known heritage-influenced design aspects like the retro-influenced bodywork, stepped seat and classically styled head-and-tail light. Respecting the bikes of the past, whilst embracing the contemporary by making use of modern technology likes ABS, LED lights, the most efficient CP2 engine to date. Thus living the Faster Sons philosophy as originally intended for this constantly evolving segment.

For the colours of 2022 Yamaha looked at one of the more iconic motorcycles of our rich history. The famous 2-stroke RD350LC from the early eighties provides the inspiration for the modern interpretation of the colour scheme, resulting in the a crisp White and Blue and a more elegant Black and Gold combination.

As introduced in the all-new XSR125, the Sport Heritage range has received an upgrade in lighting. A heritage inspired round LED headlight with a split projector and a half-circular position lamp. The tail light features a classically shaped round form while ensuring optimal visibility through its LED technology. The LED indicators are subtly shaped, as minimal as possible but also ensuring high visibility.

The new integrated headlight stays connect into the fork shrouds for a more compact front expression.

Also classically shaped with modern features, the Inverted LCD meter has been placed in a forward position for improved clarity and visibility. The lines and position are designed to match the all new head light, giving the bike a sleeker "snub-nose" look on the front end.

Besides the look, the XSR700’s legacy is earned on the road. The versatile character is the beating heart of the machine. The XSR700 is a bike to be ridden, anyway you like. From casual cruising to hitting the twisties, the bike can do it all. An accessible motorcycle that is enjoyable for both new and experienced riders. The character is reflected in the construction. The two-part frame, tank assembly and seat design are largely kept the same, safeguarding the easy-to-customise features the XSR700 is renowned for.

To refine the riding performance, the XSR700 receives new improved, larger 298 mm front brake discs, a revised front fork and Michelin Road 5 tyres. To accompany the all-black handles and levers, the switches too have received a technical upgrade, making them more user-friendly. Allowing the rider to access the LCD-meter function while riding. The radiator has also received new side covers, cleaning up the overall looks and allowing the indicators to move away from the front.

With all these new specs we keep paying homage to one of our most loved motorcycles of all time; the XT500. In 2022 we again present the XTribute, inspired by this legend amongst the Yamaha ranks. Besides the clear design references, both models share a number of important characteristics, that make them easy to love. Both the XT500 and the XTribute have a pure design, useable power and an all-round versatility. Just plain and honest fun accompanied with Yamaha’s high regard for quality.

This special combination of timeless good looks and modern technology perfectly illustrates the true spirit of the Faster Sons philosophy. With its unique specification the XSR700 XTribute gives a whole new generation of riders the chance to celebrate the past, while at the same time benefitting from the very latest technology and an outstanding riding experience. 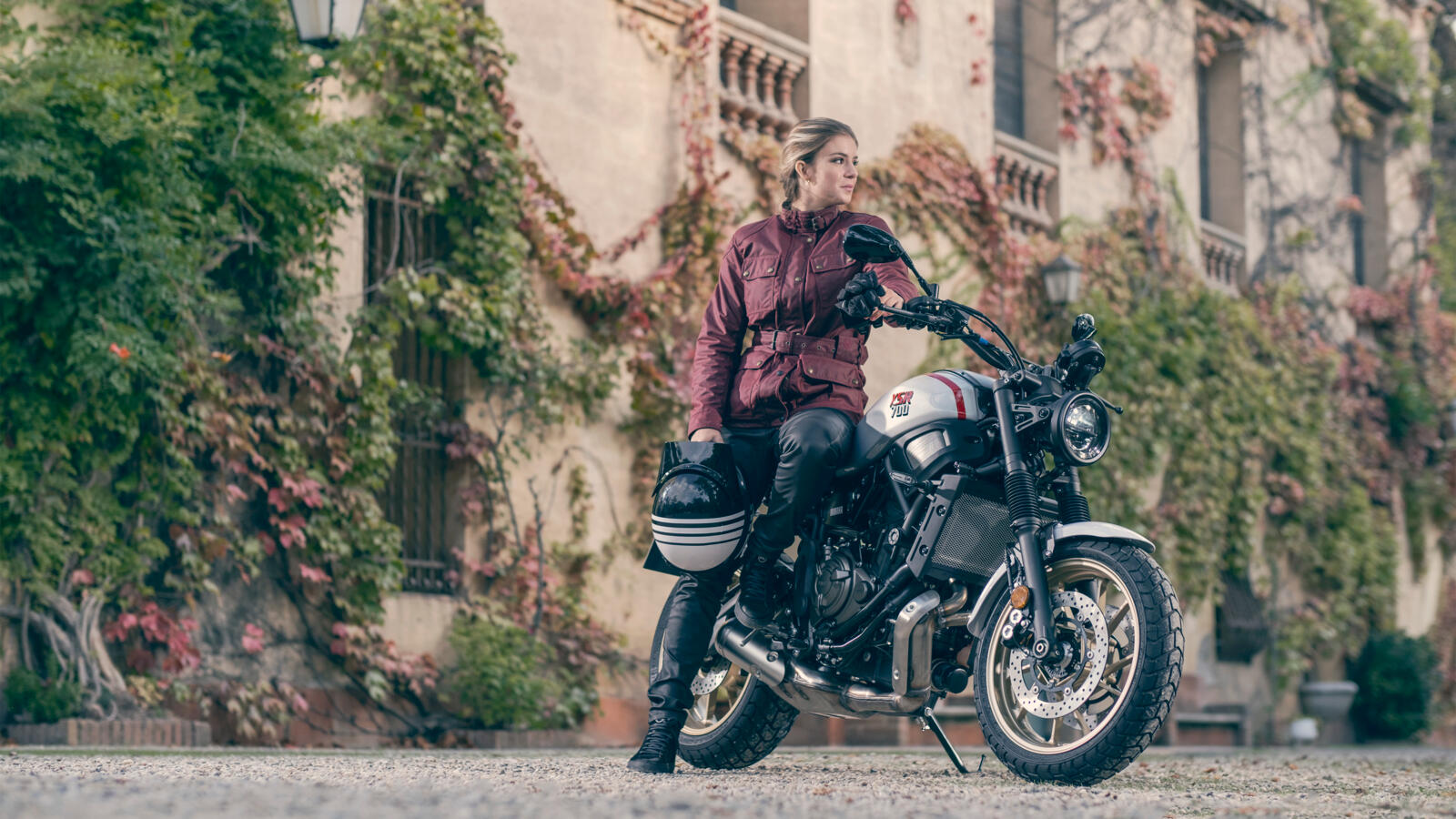 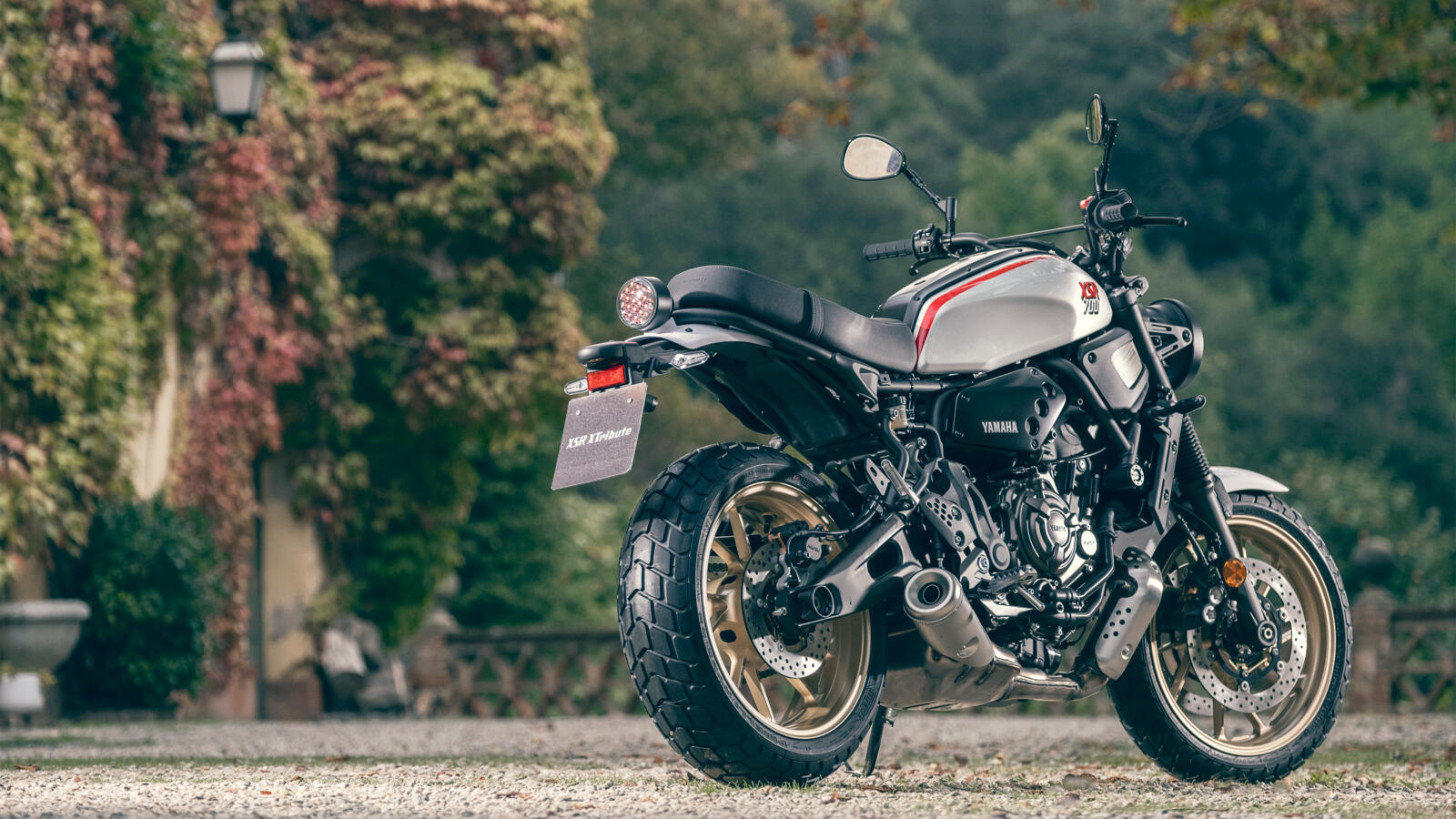 One of the most iconic features of the XT500 that attributed to its more than a decade of success was the bold yet simple styling. This exact feature is shared with the XTribute, the brushed aluminium tanks covers finished with a XT-inspired graphic package are paired with white mudguards and the celebrated gold rims.

To adopt the dirt bike style of the XT500 the XTribute is fitted with a braced handlebar. Not only do these handlebars give the proper urban scrambler looks, they also ensure a comfortable and upright riding position. The wider handlebars give increased leverage, make the bike easy to manoeuvre, even at lower speeds. Focusing on the touchpoints, we find Dirt bike style hand grips and the footrests are designed to fit the scrambler look with their chunky appearance.

For both aesthetic and practical purposes, the XSR700 XTribute’s 10-spoke cast wheels are fitted with Pirelli MT-60RS block pattern tyres, adding to the Urban Scrambler looks. The tyres provide excellent levels of grip and easy handling on the street and on dirt roads.

To respect the design principles of the XT500 the XTribute is fitted with a flat profile seat, featuring a subtle XTribute logo embossed on the rear. Providing a true 80s dirt bike look but giving modern comfort.

Every Yamaha Sport Heritage bike is designed with close attention to every detail – and the same is true on the XSR700 XTribute. Black rubber gaiters are fitted to the front forks to underline the whole retro-scrambler feel. The overall riding position is made-to-match with the braced handlebar, off road-style foot pegs and grips.

The real beauty of the XSR700 XTribute is in the way that it combines effortless scrambler cool with modern technology. With its purely designed engine, frame and forks set against the retro colours of the aluminium fuel tank covers, gold wheels and white mudguards, the impression of simplicity is reinforced, making this bike a fitting tribute to the original XT500.

Heritage is the new black

To emphasise the iconic colour scheme of the XTribute the designers chose to black-out details that are highlighted on the standard XSR700. From the frame guards, and radiator covers to the instrument brackets, all details are featured in black to blend in with the frame and the dark coloured CP2 engine; highlighting the white mudguards and superb aluminium tank covers.

Back in 1976 the very first XT500 featured a low header pipe with a high level muffler, and customers can pay homage to this look by fitting their XSR700 XTribute with the optional Akrapovič exhaust. With a black finish – like the original XT500 – this high specification 2-into-1 system gives a radical look and produces a gruff exhaust note – key features that complement the bike’s scrambler character and accentuate the premium specification of this new Faster Sons model.